Hypertension is a public health problem that happens a lot, many people do not realize that they suffer from hypertension, this is due to symptoms that are not real and in the early stages before causing serious health problems, new symptoms are clearly visible at age 50- an. Generally there have been more severe complications or diseases such as a heart attack or stroke. Because of its presence which is still difficult to detect and control, it is not surprising that hypertension has been dubbed the "the silent killer" (Julianti.2005). Based on prevalence throughout the world in 2013, hypertension spread to almost all segments of society. The high prevalence of 26.4% of hypertension makes it a high risk factor for cardiovascular disease (WHO, 2013). The chemicals contained in hypertension drugs will have an impact on the body if taken too long. Non-pharmacological therapy can be given to patients with hypertension such as Banana Ambon (Musa Acminata). Ambon banana plant (Musa acuminata Cavendish Subgroup) grows abundantly in tropical regions such as Indonesia (Yuliarti, 2011)., But its existence is only known to be only fruits and basic ingredients for making snacks and drinks. The combination of high potassium and very low salt in the flesh of Ambon banana (Musa Acuminata Cavendish Subgroup) is believed to be beneficial for people with high blood pressure and reduce the risk of coronary heart disease. Objective: To analyze the effectiveness of musa acminata against blood pressure reduction. The research method used is an experimental approach (one group) in patients with severe hypertension and then analyzed with the Wilcoxon signed ranks test technique. The results showed that in both groups the proportion of the results of the same blood pressure measurement was greater in Stage 2 hypertension (where the results of Blood Pressure measurements pengukuran 160/100 mmhg) and p-values ​​obtained in group I = 0.027 and (p <0.005 ) which means there is a difference between the results of blood pressure measurements before and after the intervention (administration of Ambon banana) while in group II the p value is 0.056 which means there is no significant difference in blood pressure measurements before and after. This work is licensed under a Creative Commons Attribution-ShareAlike 4.0 International License.

Most read articles by the same author(s) 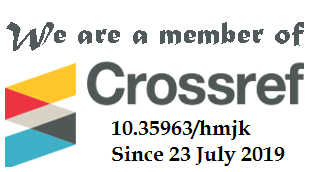